Tortilla de Patatas
Spanish tortilla (or potato omelette) was my favourite breakfast when I lived in Madrid.  “Un pincho de tortilla y un café con leche” whilst reading Marca, the daily football newspaper,  … that’s the way to start the day. Unfortunately, down here in Andalucía it’s not so common.  Toast with fresh tomato has become the typical breakfast.

I’ve cooked tortilla myself many times but never managed to achieve the flavour of Madrid’s tapas bar version so I invited Montse, a friend from Alicante, round to demonstate how it it should be done and the result was first class.

Makes 1 large tortilla or 2 medium ones 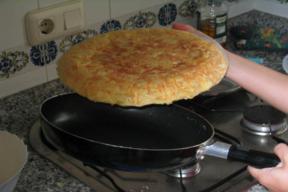 Thinly slice the potatoes , put them in a large bowl and sprinkle plenty salt over them and work it down to the bottom of the bowl.

In a large frying pan heat about ½ cm of olive oil. When it’s very hot add the potatoes from the bowl and start to fry them very gently. Be sure to keep stirring them so that they don’t stick or start to brown.

After about 5 minutes add half an onion to the potatoes. This should be chopped very fine. Stir the contents of the frying pan then cover it.

Now break the eggs into a bowl and add a large pinch of salt and beat them.

Keep checking the frying pan to be sure that the potatoes aren’t turning brown.  Turn down the heat if necessary. Keep stirring (Montse says “keep moving them” as the Spanish verb to stir is “mover”!).

Once the potatoes break easily under the touch of the stirring spoon they are ready. So now add the potato/onion mix to the bowl of beaten eggs. Drain away any excess that’s left in the frying pan oil at this point.

Mix the potato and egg mixtures together well whilst the frying pan gets very hot with no extra oil in it. 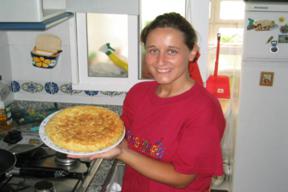 Now add the mix to the frying pan. Flatten it down in the pan and keep the heat at medium for a few minutes.

Put a plate over the mix and turn over the tortilla gently. When you return it to the pan press down the sides to create the classic shape of tortilla de patatas.

Turn the tortilla several times. You’ll find it gets heavier each turn.

It is ready when you put a knife into it and the knife comes out clean.

This recipe makes a vary large omelette. What I tend to do is create the same mixture as above but make two separate tortillas using a smaller pan as this seems more manageable. Be sure to use a ladle when transferring the mixture to the frying pan if you decide to follow this advice otherwise one omelette ends up with too much liquid and the other with too much potato.

If you want to buy this website, please don't hesitate to contact us via e-mail: domain (dot) sales (dot) org @ gmail (dot) com